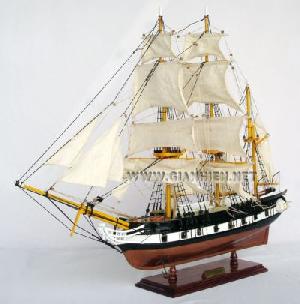 
The 10-gun brig HMS BEAGLE was launched in 1820. She never saw active service. Her career as a survey

After having been twice driven back by heavy southwestern gales, Her Majesty's ship BEAGLE, a ten-gun brig, under the command of Captain Fitz Roy, R. N., sailed from Devonport on the 27th of December, 1831. The object of the expedition was to complete the survey of Patagonia and Tierra del Fuego, commenced under Captain King in 1826 to 1830, -- to survey the shores of Chile, Peru, and of some islands in the Pacific -- and to carry a chain of chronometrical measurements round the World.

The BEAGLE was retired from seagoing service after her return from her third voyage. For many years she was moored at Pagglesham on the River Roach in Esgender as a floating office and depot for the Coast Guard Service.

Few records exist of her later career but it is probable that she was broken up in about 1870. No part of her was saved and not so much as a splinter survives as a memento of the Beagle.