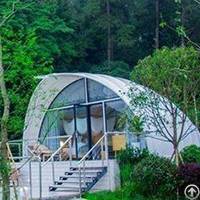 
Product Description: If you like the idea of getting in touch with nature but want to do so without sacrificing your home

comforts, then the cocoon tent house may be of interest. The semi-permanent dwelling certainly looks roomy inside and can include a bathroom with shower and a kitchenette.

The cocoon tent house isn't really a camping tent at all in the usual sense, but a semi-permanent structure house that can be raised in a few days. It comprises an exterior shell of hard-wearing translucent fabric and is supported by a frame made from steel or aluminum tubes, or laminated beams. An additional layer of insulation is available to those in, particularly warm or cold climes.

The cocoon tent doesn't require a foundation but rests atop a wooden deck and, according to the firm, is rated as able to withstand hurricane-force winds of up to 90 mph (144 km/h) and heavy snow loads. It can be outfitted to run off-the-grid and is engineered to stand up to some pretty rough weather.

Inside, the available floor space measures between 500 - 700 sq ft (46 - 65 sq m), which is split between a living area, bedroom, kitchen, and bathroom with shower and toilet. The layout is flexible though, and the firm also says the cocoon tent can serve as a guest suite, yoga studio, and office space.