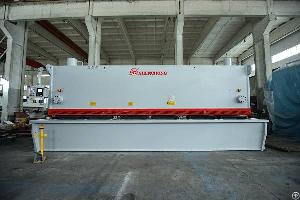 OMAN customer has ordered one set of CNC hydraulic

The triangle welded steel plate structure includes a guide plate, a blade and a back stop system. The metal cutting is done by means of the reciprocating motion actuated by the right and left cylinders.

Composed of two piston cylinders and seals. The device directly controls the movement of the upper blade beam.

Composed of several jacks which are installed at the front of the machine frame. When the oil enters the clamping cylinder, the clamping head overcomes the traction of the spring, supports and clamps the cutting plate. And it returns to its original position with the help of the force of the spring after cutting. When the plate thickness increases, the clamping force increases.

It includes an adjusting handle, lever and line. The deviation can be adjusted according to the thickness of the plate.

It consists of an electrical box installed on the left of the support pillar and buttons of the panel. This is intended for the operation and control of plate shears.